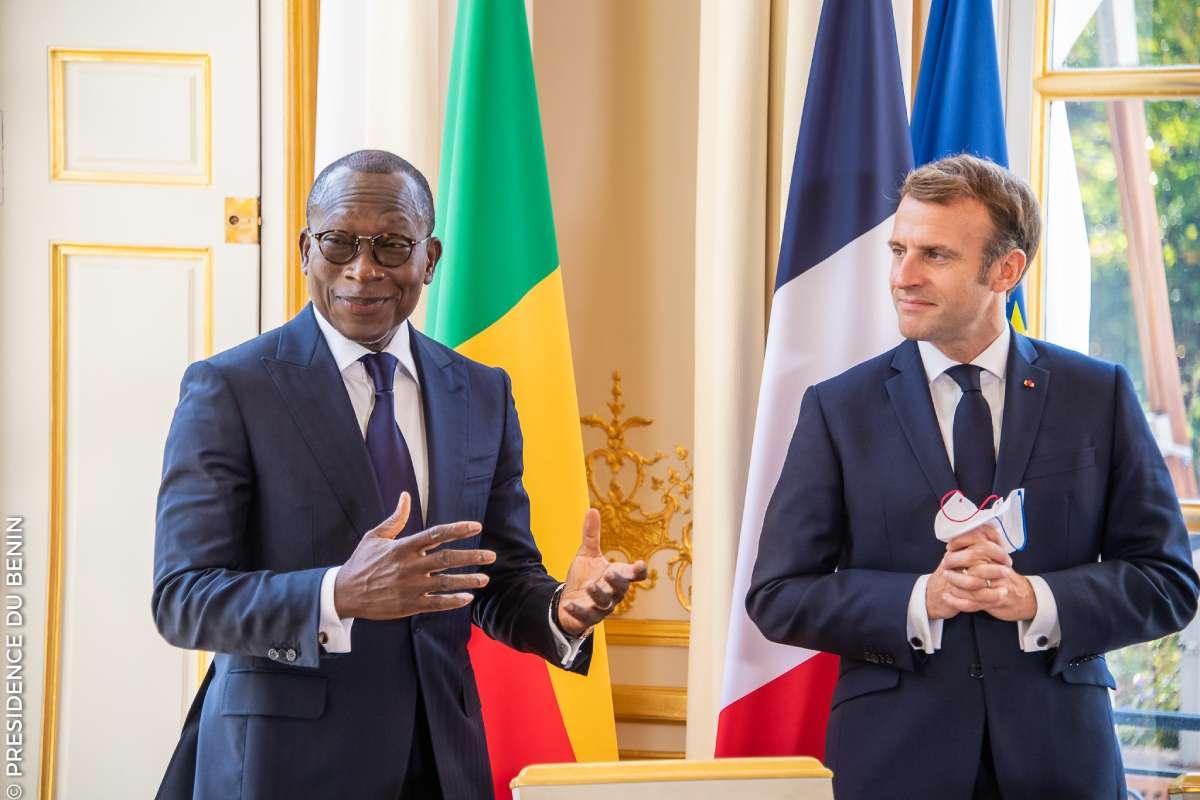 Benin and France signed two memoranda of understanding in the field of culture and education. During Macron’s visit, from 27 to 29 July 2022, Patrice Talon, Benin’s president freed some political prisoners.

Since France gave back to Benin the 26 works of the royal treasures of Abomey the French stole during colonization, the climate is good between Paris and Cotonou, said Beninese authorities.

«Five years of unparalleled development (…) economic relations between France and Benin have reached an unexpected level (i.e.) 10 times their (average) volume of the last 30 years,» Patrice Talon congratulated himself on July 27, 2022, alongside Emmanuel Macron who arrived in Benin for the second step of his tour in Africa after Cameroon where he had departed.

During his stay in Benin, the French president visited the exhibition «Art of Benin yesterday and today, from restitution to revelation: Royal treasures and contemporary art of Benin.”

Supporting Benin in the fields of culture, education specifically in vocational education and security with the fight against terrorism at the forefront, those are the main axes of the French president’s visit to Cotonou.

For Benin, concretely, what does that mean?

First, the visit strengthens relations between the two countries. From the fruitful exchanges between Macron and Talon, observers deduced that this visit opens a better future for the Beninese people.

Beyond diplomatic assumptions, the two memoranda of understanding are a sign France and Benin will intensify their relations. The memorandum of understanding in the field of education, taking into account vocational education where the financial support of France and the European Union must allow seven out of ten young people who leave the education system regardless of the level, to continue to receive technical and professional training. France will assist in the deployment of trainers around the country.

The second protocol agreement concerns culture. France has been committed, for almost four years, to a policy of museum cooperation with Benin. This policy resulted in the return, last November, of 26 artworks and financial support for the construction of the museum which will eventually host these pieces in Abomey. After his visit to the exhibition of twenty-six artworks, the French president said France is committed to return the rest of the works she had looted in Benin.

On security, Macron places France as Benin’s partner to fight against terrorism. He says France will equip the Beninese army.

For President Macron, France’s support to President Talon’s political, economic, and social reforms «is only possible if security is maintained in Benin and in the sub-region.” Hence the security situation’s a prominent place in the discussions between the two statesmen. «France will always be at the side of the Beninese authorities to deal with terrorism. She will be there to respond to your requests,» Macron said. «We have begun in recent months to respond to these requests through cooperation in terms of intelligence, and concrete interventions that we have been able to deploy.» The equipment Paris has promised to deliver includes pick-ups, bulletproof vests and demining equipment.

The two Heads of State agreed to continue their efforts in the fields of agriculture, industry, infrastructure, training and local development.

ANOTHER FALLOUT OF THE FRENCH PRESIDENT’S VISIT TO BENIN IS FOR THE BENEFIT OF THE BENINESE OPPOSITION, SOME MEMBERS OF WHICH HAVE REGAINED THEIR FREEDOM. A TOTAL OF 30 OPPONENTS WERE RELEASED DURING EMMANUEL MACRON’S VISIT. THEY HAD BEEN ARRESTED IN APRIL 2021 DURING THE PRESIDENTIAL ELECTION PERIOD, MARKED BY VIOLENCE.v