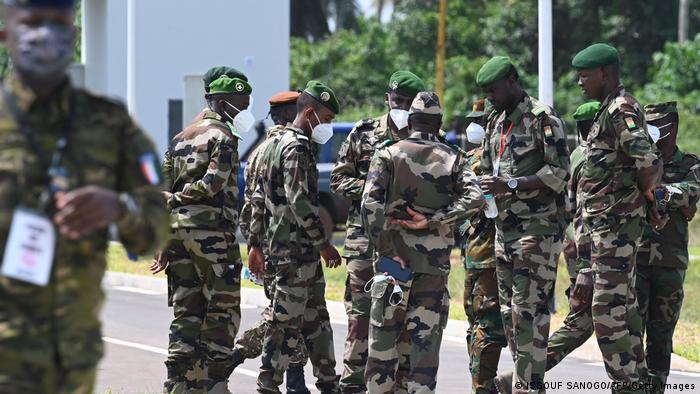 IVORY COAST AGAINST MALI A political crisis and questions about the 49 Ivorian soldiers arrested in Bamako?

The case of the 49 Ivorian soldiers arrested in Mali and treated as mercenaries is undergoing a new development. Who could unravel the inextricable skein of the quarrel between Bamako and Abidjan? A document presented as the contract that binds SAS (Sahel Aviation Services), a private German company operating in Mali, and the Ivorian army sheds a new light on what could be a state scandal.

During the first interrogation, the arrested soldiers said they were arriving to Mali as members of the Ivorian contingent of the MINUSMA. The government of Côte d’Ivoire and the United Nations, they added, had agreed on the arrival. Through MINUSMA, the UN said they do not know any of the soldiers, was not aware of their existence, their arrival, or their mission. That was the biggest embarrassment for the Ivorian government that had sent the soldiers.

The Ivoirian government had not notified the Malian government about the soldiers’ arrival, as it is the rule between two states not in war against each other. Malians discovered the Ivorian soldiers on spot, during a casual police control, after they had disembarked from their plane at the Bamako airport. The Ivorian government did not notify the soldiers’ mission either. Graver, there was a second plane, which had also departed from Côte d’Ivoire, carrying the soldiers’ weaponry.

Amazed in front of all those facts pupping up on their face, the Malian authorities contacted their Ivoirian counterparts for explanation. They received a rebuff and disdain. Furthermore, the Ivoirian government summoned Mali to “immediately release the soldiers.”

Despite the UN and MINUSMA refutation of any link with the soldiers, the government of Côte d’Ivoire kept affirming that these soldiers were acting on behalf of the United Nations. A defense rendered inoperative and unsustainable with another clarification that Farhan Haq, himself, the deputy spokesperson of Antonio Guterres, the UN Secretary General brought: very definitively, the UN and per force, MINUSMA know nothing about the Ivorian contingent arrested at Bamako’s airport; the UN and therefore MINUSMA decline any responsibility of any kind with that contingent.

After that clarification, Côte d’Ivoire’s government changed strategy. It closed the MINUSMA and UN rationale to justify its sending of soldiers to Bamako. The new rationale was a German firm operating from Mali’s airport: SAS, Sahel Aviation Services. SAS provides transportation and logistics services mainly to the UN and sundry enterprises, NGOs, or individuals needing air transportation in the huge Malian land area, 1.24 km2, with large parts of the country in the hands of jihadists, rebels, or all sorts of gangs.

The Malian government and the UN say they did not even know the existence, not to speak of the nature of, the contract between the Ivorian soldiers and SAS. That begs the single most important question: what were those soldiers doing in Mali? The beginning of an answer appeared with that contract became public. It reads:

“[The Ivorian soldiers are in Mali, as part of] the operations of the National Support Elements (NSE). The presence of this detachment of National Support Elements is in accordance with the mechanisms for supporting the contingents of troop-contributing countries in the framework of Peacekeeping Missions and is well known to the Malian authorities.” As events will reveal, that is a lie.

On 11 July 2022, the Ivoirian president, Alassane Ouattara, chaired a meeting with his close collaborators of the National Council on Security (Conseil National de la Sécurité, CNS). The meeting released a communiqué: “under an agreement signed in July 2019 between Côte d’Ivoire and the United Nations, and in accordance with a security and logistical support contract signed with the Sahel Aviation Service (SAS) Company, Ivorian military personnel are present at the Bamako Airport. Since that date, seven contingents have taken turns periodically on that site, without any difficulty.»

One recalled the UN refutation:

«The Ivorian troops do not belong to the MINUSMA forces. A request from Côte d’Ivoire, to deploy national support elements, was approved in 2019. However, no troops have been deployed under this convention since that time. We strongly encourage the two countries to work together to resolve the situation and allow the release of the detained troops,» said UN SG spokesperson Farhan Haq.

After the Ivoirian CNS’s communiqué, Farhan Hag came back to, once more, refute: “These men [the arrested Ivoirian soldiers] do not have the status of national support elements, as stipulated by the Ivorian National Security Council on Tuesday,» the UN official said.

Distancing the UN further away from the Ivoirian authorities’ version concerning the arrested soldiers’ mission, he added:  «MINUSMA notes that Ivorian elements have been deployed in Sénou (Bamako) to ensure security at the German NSE base in the same locality, instead of Timbuktu (north) where the Ivorian contingent of MINUSMA is based.”

In view of these elements, corroborated by the publication of the contract signed between SAS and the Ivorian army, which provides for paying Ivorian soldiers directly in cash at the end of each mission, isn’t Bamako justified in its efforts to see clearly in the multiple rotations on her soil since 2019 of uninvited Ivoirian soldiers, who camouflage their status under the guise of MINUSMA and, therefore, United Nations forces?

Bamako’s demands for a de-escalation…

Despite the Ivoirian CNS’s communiqué, despite the Ivoirian loud voice requesting Mali to free the soldiers “unconditionally,” the Malian authorities did not move. They intend to give a judicial follow-up to this case, after the Ivorian side refused to submit to Mali’s demands. However, the Malian government accepted the mediation that Togolese president, Faure Eyadema organized. But the discussions have come to a head.

The Malian authorities demanded the Ivorian government to publicly apologize and to issue a firm commitment to no longer meddle in Mali’s internal politics. Moreover, Bamako has demanded Abidjan to hand over the political leaders of the former Malian regime currently living in Côte d’Ivoire. Not all of them, but those who are under judicial accusations among others for corruption or embezzlement of public fortune.

Alassane Ouattara has rejected the demand. The delegations separated without any agreement. Hence, between Mali and Côte d’Ivoire, the crisis intensified. Malians immediately responded by activating the judicial component. The 49 Ivorian soldiers have been charged with attempted destabilization.

Macky Sall, who is trying to get involved in the case for another mediation, has a narrow window of opportunity. Moreover, his credibility as a neutral middleman is compromised: Mali sees him and Alassane Ouattara as the main actors behind ECOWAS that on 9 January 2022, ramped up illegal and illegitimate sanctions against Mali and activated ECOWAS standby military force ready to attack Mali if the Malian government did not obey ECOWAS’s ultimatum.